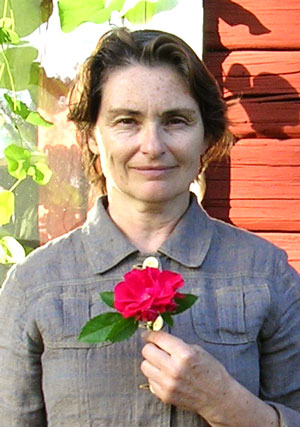 Kathy Nilsson lives in Cambridge, Massachusetts, with her husband and son. She earned a BA in English Literature from Mount Holyoke College and an MFA in poetry from the Bennington Writing Seminars. She has received fellowships from the MacDowell Colony and The New York State Writer’s Institute. Her poems have appeared in Ploughshares, Boston Review, Poetry Daily, Columbia, Volt, and other literary journals. Her chapbook, The Abattoir, was published by Finishing Line Press in 2008. Her manuscript, Black Lemons, was a finalist in the Tupelo First Book Award, and the manuscript The Infant Scholar was selected for Honorable Mention in the Steven’s Poetry Manuscript Competition sponsored by the National Federation of State Poetry Societies. She is a recipient of the Poetry Society of America’s Robert H. Winner Award.

CJ: You said recently in an interview with MassPoetry that it took twenty years learning to write a poem and then put them together in a manuscript to send out and then shape it into a book. Can you expand on what your learning process was/is?  About the patience that entails?

KN: I started writing poetry in 1989.  After twenty-eight years, I can harness my imagination and make sense of myriad associations.  I suffer from synesthesia and also from a kind of thinking backwards.  I knew I wanted to get to gold––but it was slower than panning for it.  I couldn’t make sense of what I said–– couldn’t string images together.  A little like my Aunt Lou (whose first language was French) when she said things like–– they have to call in the abortionists (after a storm) or I love my little Christmas carcasses (watering her plant) or (when I’d ask how are you Lou?) she’d say, I have a pigsty–– off in meaning but pinning the tail on the donkey.  I’ve inherited her pathological dyslexia and it took me forever to order my poems.  My chapbook, THE ABATTOIR, was published in 2008 by Finishing Line Press and my first book, THE INFANT SCHOLAR, in 2015 by Tupelo Press.  I had no choice but to be patient through years and dollars submitting.  I could fill a room ceiling to floor with sheets of versions of poems I threw out.

CJ: You also mention that you gather much of your inspiration from gleamings of trash and gold from reading. Can you give us an example?

KN: I gather inspiration from journals I keep of facts or images that strike me reading nonfiction, newspapers, The New Yorker, my father’s magic periodicals.  I found the elephant at the end of STILL LIFE in MUM magazine–– that circus elephant was said to be hit by a car and he did not mind.  It came to me that he ought to disappear (which is what magicians do, “vanish” things) and not mind.  How many revisions or exactly what order it took, I don’t know–– but it felt right.  In LITTLE ICE AGE the horse from another century comes from looking up eclipse in a reference book.  A famous racehorse named Eclipse popped up as if he were the very definition of the word.  If some of my images are surprising, I think it’s because they come from real life and they surprised me.

CJ: In your poem “WITH EXTROVERSION” it feels like a collage of such gleamings. For example, Face recognition among/Sheep—dreams of mice asleep in cabins/And laughter in rats after a fall—So vivid and unusual, but working like a captivating piece of abstract art. You’re also a visual artist. Can you tell us about how the art of painting and the art of writing complement or distract from each other?

KN: In almost every poem there is a fact lifted from something I read.  The librarian on Monhegan Island chuckles when I check out the same books every summer on Hitler, Hiroshima, early man, lobsters–– with my name listed in the cards several times.  I read that sheep recognize faces, mice dream and rats laugh–– I didn’t make it up.  If my images are visual, it may be because I studied painting at the Art Student’s League in NYC when Rosa would take someone homeless off the street, bathe them in a claw-footed tub in the basement and pay them to pose nude for a mishmash of famous people and girls like me side by side trying to capture the color of flesh or an orange in natural light.  Painters like Francis Bacon and George Condo, artist Kiki Smith, filmmakers like the Quay Brothers and Tarkovsky have led me in uncanny ways to some poems

CJ: Leonardo da Vinci wrote a treatise titled On Painting. He believed painting was the superior art because it involves the sense of seeing. He said his paintings could make a dog bark. How would you respond to this?

KN: Leonardo daVinci knew what he was saying–– his Mona Lisa could make a dog bark.  When I look at a painting it’s like looking into a brain or open heart.   It happens when I read a poem too, say, by Marie Howe–– her thoughts and emotions appear like a clear glass of water for me when I’m thirsty–– though I would caution young poets not to try what she does at home.

CJ: I’m intrigued by your choice of not using traditional titles, and to, instead, capitalize the first few words of each poem. Was this a forethought or an afterthought for your manuscript?

KN: The idea for not using titles came from Celan’s Last Poems.  I had titles for some poems but decided brevity, white space and condensation would do well without the interruptions.

CJ: Who are you reading these days?

KN: I’m reading Marion Fay–-always reading Trollope in one continuous Mobius strip–– and read them all several times to be in that world rather than this.  Books piled on my table: Kazuo Ishiguro, one of the loves of my life, Clarice Lispector, a mystic, sad idylls by Adalbert Stifter and Tarjei Vesaas, magical realism of Bruno Schulz.  One pile of poetry by Plath, Thomas James, Frank Stanford, Lucie Brock-Broido––sometimes Marie Howe and Thomas Transtromer, Wallace Stevens, and Billy Collins set me straight.

CJ: Can you speak about your dear friendship with the beloved Lucie Brock Broido, how you inspired each other in both life and writing?

KN: Lucie Brock-Broido saved my life–– first from engulfment the summer after my only child was born when my husband suggested I take a poetry writing class.  I had a degree in English literature which had made the idea of me writing poetry absurd.  Of workshops posted in the Grolier window, the only one who would take a beginner was Lucie.  Her classroom was across Kirkland Street where I lived and she said, I could throw a paper airplane to you.  The first time I saw her, she entered in a miniskirt the length of her hair, collar buttoned up to the chin and long dangling ruby red glass earrings.  She said–– all trees are oak trees unless they are alder trees–– a poem is an egg with horses in it–– don’t hold back–– into each poem put everything–– give yourself away.  Suddenly, I understood T. S. Eliot and I could buy books by living poets and read them.  Lucie swore I wore white gloves when I raised my hand to ask a question.  For twenty years she trained me like a monkey to take off in a space ship to the moon.  In our first conference when I said to her, “I know my serial killers” she looked in my eyes and replied, “I’ll bet you do.”   She called me Kathleen, Mrs. Nilsson, The Oncologist’s Wife.  Slowly but surely, I began not agonizing over a lifelong inability to express myself.  Later on, Lucie and I would insist we stole our ideas from each other but not in the way you’d think–– she would insist she stole hers from me and I would insist I stole mine from her.  Recently I found a line in one of her poems that I have written in one of mine and I’ll never know who stole from whom–– which is comforting.  After she died, I came across her books on Hitler, Hiroshima, early man, lobsters.  Who came first?  She did.